Parallel Ink -AR app that draws magic on your hands 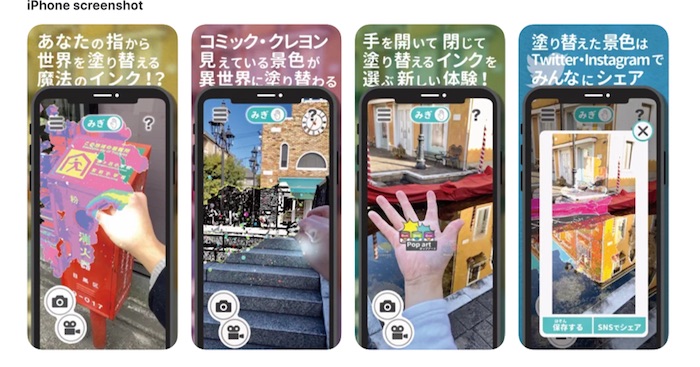 – A magical AR app that “repaints the world” from your fingertips

ManoMotion wanted to know more about the AR app and interviewed KATAKOTO, the creators behind the app:

A short introduction on who you are and what is your background in AR Mobile game development?

We are a creative unit named KATAKOTO.  We work in a team of two people, an engineer and a designer. Originally, we have been developing products together since we were students. Since the engineer Kiyotaka did research on AR when he was a student, we naturally started developing AR content.

Can you tell me a bit more about your latest app, Parallelink ? What inspired you to make this game? Who is the target audience?

“Paralle lnk” started by creating a prototype that uses AR markers to change the pattern of space. However, if the experience method is as it is, the user needs to print the AR marker, which raises the hurdle of the experience a little for the application to be released. With that in mind, we stopped the project once without releasing the prototype. Some time later, I happened to learn about Manomotion while doing technical research. When I actually saw the development using the SDK for the first time, I was able to confirm that hand tracking can be easily introduced. We came up with the idea that by adding this “hand-operated” interface, we could change the design of the space with our fingers, which would be a fantasy or magical operation or experience. And we were able to recreate the prototype we made earlier, decide to release it as “Parallel Ink”, and release it.

We assume that our target audience is a wide range of users, from children to adults. We want people who have never touched AR to enjoy it intuitively.

What resources have you used to learn, connect, and become a better AR mobile game developer?

When we develop AR content, we try to get hints from various contents. That’s because we don’t think that the particular best form of AR content has been born. “Parallel Ink“ also gets ideas on how to manipulate content from magical movements that appear in fantasy games and movies. We believe that we can create new experiences by taking inspiration from different fields that are not related to AR or XR.

What tools do you use in development?

We mainly use Unity for development.

What problem did you face while integrating hand tracking in your game? Were your problems limited to design? Were there technical challenges?

When we integrated hand tracking into the game, the problem with designing the experience was the lack of physical feedback. With a hand-operated interface, when operating in the camera image, there was no physical reaction, so it was difficult for the user to judge whether the operation was successful or not. To solve this problem, “Parallel Ink” has added Haptic Feedback for smartphones to match hand tracking. We’ve built in to generate Haptic Feedback when doing hand tracking and while picking your fingers. This makes it easier for the user to intuitively feel that they are “operating with their fingers.”

What advice would you give to a developer thinking about making an AR application which includes hand tracking?

We used Manomotion for the first time this time, and it was very simple to use and easy to integrate. Like us, you can build new experiences by turning an interface such as a prototype that was previously created in another interface into hand tracking. Even if you are a developer who has never used hand tracking before, please try to create a new operation experience with Manomotion.

We use cookies to ensure that we give you the best experience on our website. If you continue to use this site we will assume that you are happy with it.OkPrivacy policy