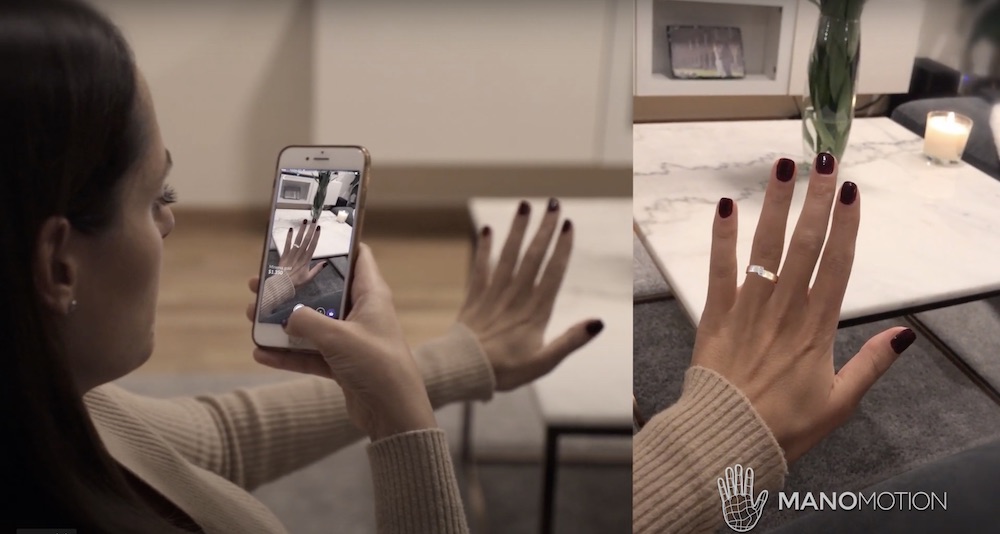 This document targets beginner-intermediate developers who want to build their own virtual Ring Try-On application using ManoMotion’s PRO SDK. You will learn how to access ManoMotion’s features in an easy manner, without any prior knowledge of the SDK. By the end of the tutorial, you will be able to show a virtual ring on your finger using Augmented Reality. How cool is that !

You can access the official SDK PRO documentation in your downloaded Unity package. For more “how-to” material, visit our YouTube channel and join our official Discord server.

Part 1 – Getting the finger’s information

Part 1 – Getting the finger’s information

First of all, let’s get familiar with the SDK package. There are several important components that you will need to know about during the development of the application. Some of them collect the information coming from the library and display it to you in an accessible manner, while others ease the implementation and representation of such information.

In your Player Settings, set your Company Name and Product name as the one you will find in your Dashboard on ManoMotion’s webpage. You can change the default strings for these, but once the license is activated (the first time the application runs on a device), they will be locked as they are bound to the license.

NOTE: Check that the License and your bundle ID match (you can check that out in your Dashboard) – you can also use Unity’s Other Settings > Override Default Package Name

If you build and run the application, you will be able to see a 2D representation of the hand’s skeleton if you put it in front of the camera. Congratulations!

Now, let’s implement the features that will allow you to show the finger’s information – that is, the library’s finger width and position in real time. This is where the ring will be placed in your app.

Add a FingerInfoGizmo that will show visually where the ManoMotion tracking detects the fingers’ info points (you can serialize this field).

Then, let’s tell the SDK we need to get the finger information:

In the previous method, we access the ManoMotionManager singleton in order to change the session settings. We enable gesture recognition, finger info tracking and we also set the default finger to track to 4 (the ring finger).

Finally, we update every frame with this finger’s information.

In the previous method, we check that the Session’s settings are correct. Then, if the hand is in the GRAB_GESTURE (hand open) we show the finger gizmo in the ring finger.

If you build and run the app, you will see something like this:

You probably will notice some jittering coming from the skeleton. We will fix this in the next part of the tutorial, along with some more visual improvements.

In the first part of this tutorial we learned about how ManoMotion’s SDK displays the finger’s information in our Unity application. Now, we will work on some features to make it look a little bit nicer, so don’t miss out!

First of all, we will disable the visualization of the 2D skeleton. After all, it is not something we’re interested in seeing while trying a fabulous ring, right? 🙂

To do so, we will go to our SkeletonManager prefab in the scene and set the 2D Joints to “2D Joints No lines” – that will make the joints invisible, and the app will only show the ring information.

We will now reduce the jittering of the finger tracking. As you may have noticed, the finger info gizmo will behave a little bit strangely in some situations, for example, when you move your hand too fast, or it will move around when you keep your hand still. This happens because the finger’s position is updated in each frame. To solve this problem, we will introduce some smoothing to make it look nicer.

We will use ManoMotion’s Manager smoothing value for this, so we don’t have to implement the smoothing function by ourselves. On the other hand, we have to add a way to interact with this value:

You can set a default smoothing value for the slider: I will set it to 0.3 – the smoothing values are normalized to be set between 0 and 1 at all times (with 0 being no smoothing, 1 maximum smoothing)

Let’s now link the slider with the smoothing value: in the Slider inspector window, set the OnValueChanged event to SetManoMotionSmoothingValue(Slider) and add the slider to the parameter reference in the method.

There’s a caveat about how smoothing works: the higher the value is, the slower the ring gizmo will move. This happens because the system interpolates between the different positions where the hand has been in the previous frames, so play a little bit with the values to check it out and see how it fits your application.

In the second part of the Ring Try-on tutorial, we learned how to improve the tracking visualization in order to provide a smoother experience for the users. Now we will learn how to guide them when using our app for the first time, making our app more accessible to non-tech users! As developers, we sometimes take for granted some things such as hardware/software limitations, but that isn’t usually the case for the regular user.

We will now add some clues to make our app intuitive. We will take into account the distance of the hand to the camera, as well as its placement in the frame.

First of all, create a warning object inside the UI that will tell the user to put their hand in front of the camera, it could be something like this:

Let’s now modify our RingManager script to allow the warning panel to appear and disappear when it detects a change in the hand’s tracking.

Do the following changes:

Extract all the code related to finger information into a new method (ShowRing()). Then in Update() check if there is an open hand detection to show the information, if not, set the warning panel to Active. Set the warningPanel field in the inspector to your WarningPanel GameObject or assign it in the Start. I also created a “GameObject finger” field and assigned it in the same way.

If you build the app, you will see that the panel appears and disappears depending on the hand’s detection. But if you put it too close or too far to the camera, some tracking issues may appear. Let’s add some depth detection to our script, as well as some refactoring:

This will be the last part (for now!) of the Ring Try-On series of tutorials. So far, we have learned how the ManoMotion SDK tracking works, how to make it look nicer and how to guide users through the application. Let’s now get to the real business: showing a ring instead of the finger information gizmo.

First of all, let’s create a public field that will be the reference of our ring prefab. We will call it “ringPrefab”. Then, we can assign the prefab of our preference in the inspector.

In my case, I will instantiate it in Start() and assign the reference to a private field in the class:

Now we have to get rid of the “Finger” GameObject, which as we have seen, is just a representation of how the SDK interprets the finger information. We do not want to see this in our final application, so replace the references to “Finger” to our “ring” GameObject. Also, deactivate it in the Start() method. (GameObject.Find(“Finger”).setActive(false))

Edit the ShowRing() method to make the ring prefab follow the finger’s rotation, scale and position properly. It should look like this:

Now we need an actual 3D model of a ring! You can find one in:

If you explore it a little bit, you will see that it contains a couple of GameObjects:

We have to find a way to occlude the parts of the ring that shouldn’t be visible. We can do so using a Cylinder that will simulate the finger bone. Place it inside the ring:

But it doesn’t look like a finger… It doesn’t have to! Let’s create a shader to make it look invisible but also make it occlude the geometry behind it, but not the background, so it simulates the finger being there without having to code any logic.

Apply the following shader to a new material (Create > Material) (and add it to the cylinder):

And here we have it! Build the app and see the result:

You can do so many improvements to your own ring try-on application using the ManoMotion PRO SDK. For example:

Find much more in Manomotion’s official documentation (included in the Unity package) and in our official API Reference.

Feel free to contact us on our webpage, social media and other official channels for more information. Good luck and have fun developing with ManoMotion!

We use cookies to ensure that we give you the best experience on our website. If you continue to use this site we will assume that you are happy with it.OkPrivacy policy